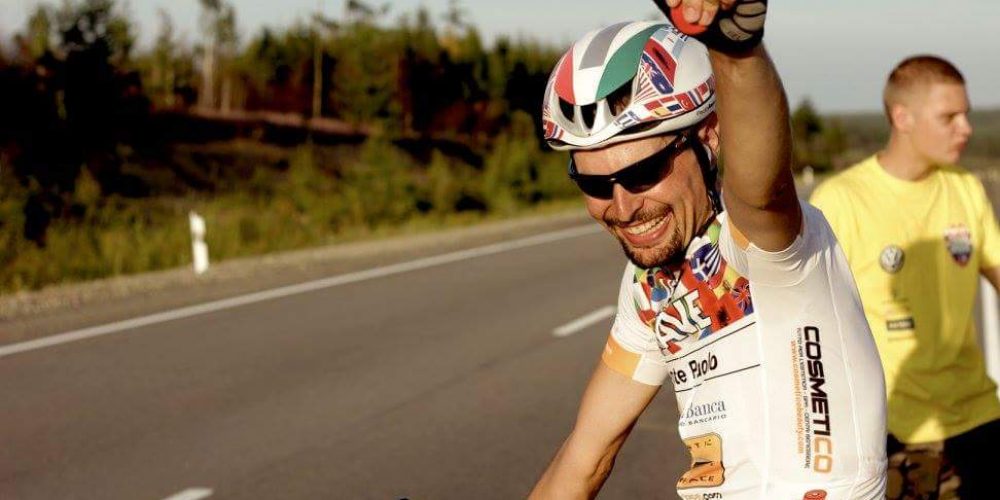 On October 3rd our athlete Paolo Aste,  ultra-cycler of international renown, came back from Trans-Siberian Extreme not long ago, is going to attempt on the new record Monte Carlo-San Marino. We interviewed him so that he could tell us about this new enterprise.

Paolo, tell us about your new challenge. Why Monte Carlo-San Marino?

The record between the two republics is a Umca record ( UltraMarathon Cycling Association ) which has already been set by Marcello Luca within 22 hours and 22 minutes. The records go from West to East, from North to South, or from a capital city to another, as it is the case. The route is quite suggestive: it starts in Monte Carlo, in the Principality of Monaco, it wind its way down across Mentone, Ventimiglia, the Italian Riviera, until Imperia, then it does the Sassello, goes towards Piacenza Bologna and it covers the whole Adriatic coast up to San Marino. I like pitting my strength, so this time  I do hope of doing a fast time, too. I will try to break the previous record!

Therefore you are going to ride solo…

Yes, it is a record, so no other starters are expected. I am going to have a judge in my train, and four other people which follow me in the enterprise, a car and a van. So, six people and two vehicles.

How many hours do you expect to spend?

The main  thing is spending less than 22 hours and 22 minutes, then  it will depend on the weather conditions and, above all, on the wind, because until Imperia it can make the difference if it will be favourable or not. The best thing would be a neutral wind so that we have equal conditions during the whole route.

Who organises the whole thing?

I organise. Then there is a judge who send all the data to the American federation Umca. Among the other people following me, there is a mechanic, a person examining the road, and one checking the traffic and the possible alternatives. However, on the whole, I am going to follow the route of the previous record. The regulations are clear: you have to start from the appointed point and arrive to the appointed point. It is allowed to do variations in the route. But in my opinion, it will be almost the same route we described above, since it is the shortest one. Every other alternative route is surely longer.

Why did you choose to apply yourself to the ultra-marathons, what does thrill you the most?

I am fascinated by moving the bar up  one step at the time. It is a thrill to do my best. Seeing new borders, new views, and experiencing new emotions!

Which tools are you using for your training?

I am using SPH App for my training. Now I am going to use it even for the new record, with a backup battery for trying to cover the twenty-two hours which await me, because the mobile’s one usually last four-five hours. Therefore, we are going to try to reach the ten hours with a backup battery, and then as the battery goes flat, we are going to change it with another one. We will try this way, but I think there will be no problems.