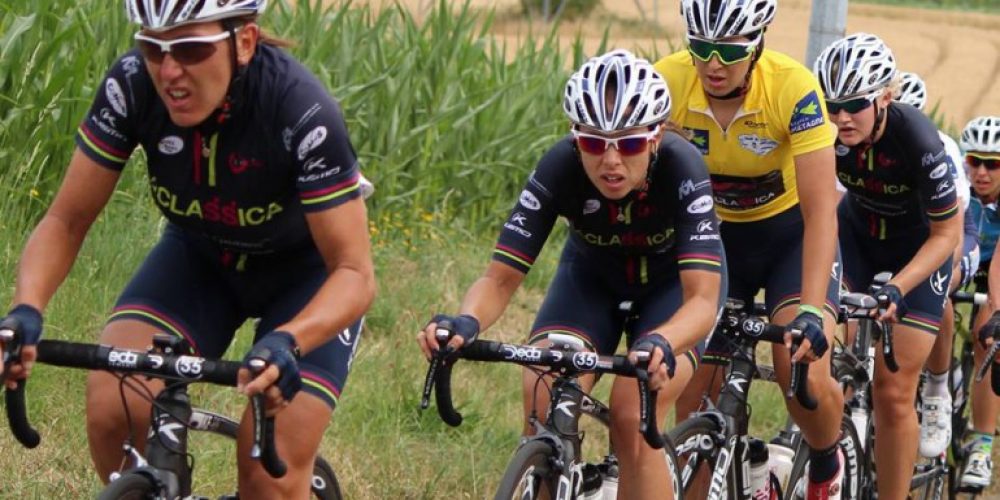 Double win for the BePink team. In the general table, first place goes to the clever Ilaria Sanguineto, Valsecchi is placed fourth, Chulkova seventh, Williams thirteen. The BePink win in the team table as well.

During the Tour de Bretagne Féminin Ilaria Sanguineti wore the gold jersey at the end of the first fraction and never hand over it. She – Ligurian, from Ventimiglia – came in first in the general table of stage race by winning by gap the first stage of the Tour de Bretagne, once she crossed the Pouldreuzic leave-taking line (Finistère), reached after 106,4 kilometres from the Plonéour Lanvern start, and she got to the first place even in the table dedicated to young women

In the last of four stages faced beyond the Alps, in a persistent rain and a not very summery temperature, even Silvia Valsecchi moved in during the final phases and, although she was caught up by the pack moving toward the arrival arch, she succeed in celebrating in the best way ever her birthday buying herself the prestigious fourth place in the general table.

Even the win of the team table arrives to complete the joy of the BePink LaClassica. A result which rewards the great job done by all the girls, supervised in France by DS Sigrid Corneo.

“It is always great to win, but this away race has been special indeed. Ilaria’s return to success is very valuable for us, but the competition days were distinguished by a quite fantastic team work,” Sigrid Corneo commented. “The girls work well together and were at their best every day, performing the competition professionally, with determination and, as always, with passion.”

“ We are definitely satisfied with the important result, we went to race aware that the girls were in good physical conditions after the Tour of Italy, and it allowed us to win the first stage at once, attacking with Silvia Valsecchi, and carrying on with Ilaria Sanguineti. We won the stage by a good advantage margin, it allowed us to control the competition and this, along with the excellent team work, led us to win the whole race” the BePink team manager Walter Zini has told.